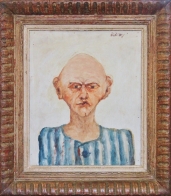 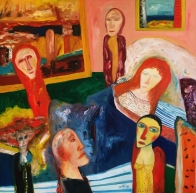 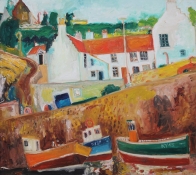 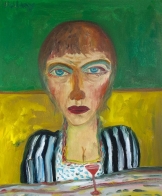 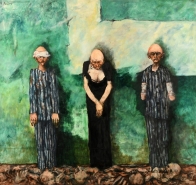 John Bellany was born in Port Seton, a coastal town in East Lothian, Scotland. Born into a fishing family, both his father and paternal grandfather captained fishing boats.

Regarded as one of the most notable British artists of the 20th century, he was viewed as an outstanding student at Edinburgh College of Art from 1960 to 65, during this time gaining the Andrew Grant Scholarship in 1962, taking him to Paris. He went on to win the Burstain Award to attend the Royal College of Art in London in 1965, where he studied under Carel Weight and Peter de Francia.

He moved to London where he was the visiting Lecturer at the Royal College of Art. It was during this period that he separated from his first wife that his reputation for being a heavy drinker began. From 1978 until 1984, Bellany was Lecturer in Painting at Goldsmith College of Art. He remarried in 1978, but his second wife spent long periods of time in hospital suffering with schizophrenia which contributed to his increased bouts of heavy drinking, a “curse” that was to persist throughout his life.

John Bellany died in 2013, he was found in his studio clutching his paintbrush.

Works by John can be found in The Tate, the National Portrait Gallery, New York’s Museum of Modern Art, National Galleries of Scotland, to name but a small few.

Among Bellany’s honours are a Major Arts Council Award (1981), Athena International Art Award (1985), Royal Academy’s Wollaston Award (1987).
He was made a Royal Academician in 1991 and awarded the CBE.