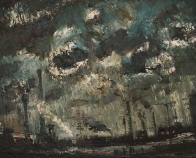 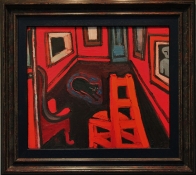 Theodore Major exhibited widely within public galleries, including Nottingham, Bolton and Manchester. He was also a key exhibitor at Arts Council sponsored exhibitions at Tullie House, Carlisle, and Blackburn Museum and Art Gallery.

Disliking the commercial gallery system and the ownership of his paintings by "wealthy collectors", he had just one exhibition in a commercial London gallery during his life time, the Mercury Gallery.

Theodore major is now celebrated as one of the leading names of the Northern Art Movement of the twentieth century, and is held in high regard by such collectors.

Theodore Major died in 1999. Two major retrospectives have been held since, in 2003 at the Salford Art Gallery, and in 2008 at Gallery Oldham. Many major UK public galleries and museums hold his work, including those in Manchester, Salford, Oldham, Wigan and Buxton.

In addition to viewing at the gallery in Cumbria, all works are available to view, by prior arrangement, in Central London, either at your own home or in West Kensington. Contact us today for further information.