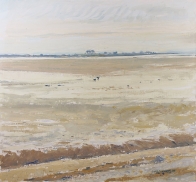 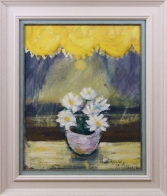 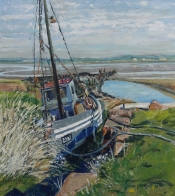 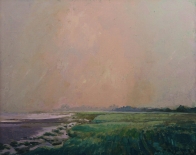 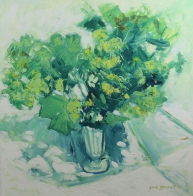 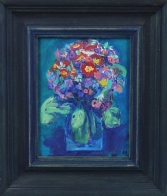 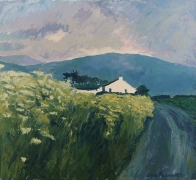 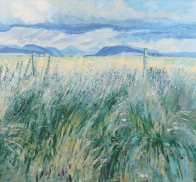 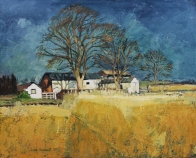 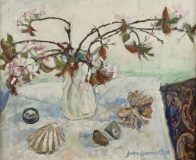 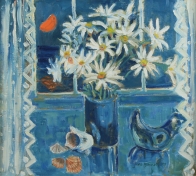 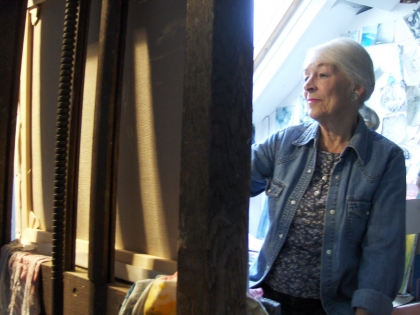 June Steer was born in Grange-over-Sands in 1935, being the second of four sisters, their father being the professional at Grange over Sands-Golf-Club.

June showed a great talent for painting in her teens, encouraged by her uncle, Tom Armes, himself a professional artist. After leaving school at Ulverston Grammar, June began a five year course studying Art at Lancaster College of Art, and in her final year, Leicester College of Art. It was during her studies at Lancaster that June met Mike Bennett, with the two married in 1959. In these early years, June began to exhibit her work, and in 1957, she had work shown at the annual exhibition of the Society of Women Artists at the Mall Galleries, London.

June continued to paint after her college years, but it was whilst she, Mike and her two sons, Justin and Giles, now themselves professional artists, were living in Yorkshire, that she began in earnest to develop her skills toward a new medium, namely silver and gold. To this degree, June attended a Silversmithing course at Wakefield School of Art.

Soon Mike left his teaching post at Bretton Hall, to become a full-time professional artist. The family lived briefly in Lincolnshire, before moving back into "home territory" and to Seascale on the West Cumbrian coast. It was at this point that June began to exhibit her jewellery in a wider capacity, including such venues as the Goldsmith's Hall London, Park Square Gallery Leeds, Bluecoat Gallery Liverpool and Abbot Hall, Kendal, becoming a Committee Member at Northern Arts, and the Guild of Lakeland Craftsmen.

Her jewellery was always free, richly textured with obvious references to the natural world; plants, landscape, poppy fields etc., and in many ways a foretaste of her painted works to come.

It was at this point, around 1985, that June began to paint again. She abandoned her jewellery workshop, disposed of all of her equipment and immersed herself in Oil and Turpentine, working alongside Mike; a true artistic partnership, but very much their own people and artists.

Colour and texture were transformed into her individual, inspired view of the world. as Mike says, "it was as if the floodgates had suddenly burst open, and paintings flowed out of her in a frenzy of activity." Bold, richly textured and colourful works began to pile up in her studio.

June's first solo exhibition was to be held at Castlegate House Gallery in 1988. Ten further highly successful shows followed over the following two-plus decades, with her work also being exhibited in London, Edinburgh, Cambridge and the Laing Gallery Newcastle. Works were also acquired for the House of Lords collection, Tullie House Carlisle, The Copeland Collection and many private collections within the UK, mainland Europe, the US and Australia.

June liked to work "on the spot", working on canvas or making colour studies for development back in her studio. Her first exhibition at Castlegate House was such a success that June was able to acquire her "travelling studio", a bright orange VW Camper Van, her pride and joy, enabling her to work out in the open in almost all conditions!

June loved the sea, the estuary and its surrounding landscape. She saw them with a very personal and powerful vision. She was able to transform a seemingly ordinary landscape into something vibrant, exciting and visionary. Perhaps her greatest legacy was her ability to make people look at the world with new eyes. Seeing rhythms, textures, colour and patterns that had eluded them previously. People who own her work often say that her works lighten their lives, giving off a warmth and power that can change their mood.

June was a dedicated artist, never happier than with brush in hand. In her final year, against all the odds, she continued to grapple with pictorial ideas and compositions. She finally completed, three weeks before she died, what was to be her final painting; a new vision of trees on the other side of the Solway coast. This was to be an oft-returned to theme, but each time, over the years, returned with a new perspective, freshness and delicacy. The painting is exhibited here as June's Trees; Last Painting.

Alongside her land and seascapes, June also produced some fine portraits, both as commissions and as her own artistic expression. A number of these works can also be seen within the exhibition.

Mike and June Bennett have been represented by Castlegate House Gallery for over twenty five years. Indeed, many will have seen our sixty-year retrospective for Mike late last year. It's a great shame that we weren't able to hold this exhibition for June whilst she would have been able to walk amongst the works herself, in her trademark bright pink lipstick. This is a celebration of not just June's work, but of June; from the remarkably early paintings of the 1950s, signed in her maiden name of June Steer, right up to her very last work. It's a vision of June, and of her vision of the world around her, in all of its moods, shapes, colours and lights.