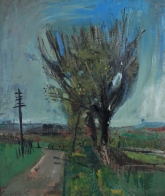 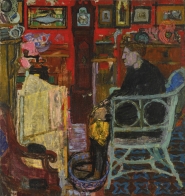 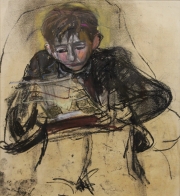 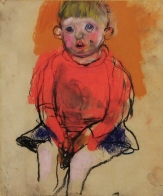 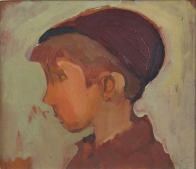 Joan Eardley was born in Sussex in 1921. A tragic childhood, with her father committing suicide when she was just nine years old, she moved with her Mother and sister, Patricia, to Blackheath, London in 1929.

Showing an early aptitude and enthusiasm for art, Joan attended the local art school in Blackheath, but soon won a position at the prestigious Goldsmiths College. Following a family move to Glasgow, Joan secured a place at the Glasgow School of Art in 1940, a move which was to significantly influence the course of her future life and art work. Here she was awarded the Sir James Guthrie prize for Portraiture.

Following spells away from Scotland after graduation, Joan returned and set up home and studio in Glasgow in 1949. Close to the tenements of Townhead, Joan began to paint the children from the “slum areas”. These are regarded as amongst the most powerful and prized of her life’s work; depicting the deprivation and yet humanity within the faces of the children.

In the early 1950s, Joan purchased a cottage at Catterline, a small coastal village close to Stonehaven. Here she began to experiment with both land and sea-scapes, working with paint to depict her surrounding world with a life and energy few had managed before.

Joan was made and associate member of the Royal Scottish Academy in 1955, and voted a full member in 1963. Sadly, it was in that same year Joan lost her battle with cancer and died, aged just 42.