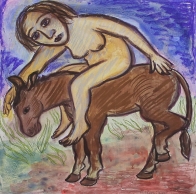 Not only one of only eighty members of the Royal Academy of Arts but also until 2017, the first female Keeper of the Royal Academy in its almost 250 year history, Eileen is one of the foremost names in British contemporary art. As Keeper, Eileen was in charge of the RA Schools, a prestigious position she held from 2010.

Born in Glossop in 1953, Eileen Cooper studied at the prestigious Goldsmiths College, subsequently studying painting at the Royal College of Art. Gaining commercial and critical success from the 1980s, Eileen began and has continued to teach at many of the most well respected institutions, including St Martin's School of Art, the Royal College of Art and, as mentioned, as head of the RA Schools, in her capacity of Keeper.

Instantly recognisable, Eileen’s work clearly displays a female perspective, covering a multitude of themes, including motherhood, sexuality, transition and death. Her works span a multitude of disciplines, from painting in oil and watercolour, to printmaking through lino and woodcut, to drawing and collage.

Hide and Seek, a highly successful solo exhibition, was held in 2015 at the Royal Academy of Arts, coinciding with the publication of a book by Martin Gayford, "Between the Lines", covering four decades of Eileen's work.

In June 2016, it was announced that Eileen had received an OBE for services to art.