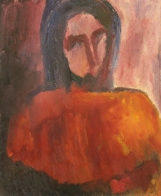 One of the most influential British artists at work in the twentieth century, David was born in Birmingham in 1890.

Initially studying art in London at the City and Guilds, David Bomberg was to study under the highly respected Walter Sickert at the Westminster School of Art, subsequently gaining a place at the Slade School of Art. It was here that David studied under the famous Henry Tonks, alongside such soon-to-be-famous names as Stanley Spencer, Ben Nicholson and Paul Nash.

The Slade was hugely important in the development of David’s work, but that didn’t prevent him from expulsion in the summer of 1913. Flirting, rather acrimoniously, with the Bloomsbury Group, David was to eventually form ties with the Camden Town Group, subsequently becoming a founding contributor to the London Group in 1914.

After returning from active service in the First World War, David Bomberg took on a number of teaching positions, no less notable than his leading role in the Borough Group, where he was to teach and become a driving influence of a young Frank Auerbach.

What followed was to become recognised as David’s “golden era” of work. Spells living abroad in Spain were to inspire some of his most well regarded works.

David died in Spain in 1957, leaving a body of work and influence that is as relevant today as it was then.

Following his death, David’s reputation continued to grow, with many retrospective exhibitions held, including at the Tate in 1988.

David Bomberg is rightfully regarded as one of the leading lights of the twentieth century British art world, and arguably one with the greatest influence on generations of artists to follow.